The links above may not play in all browsers. 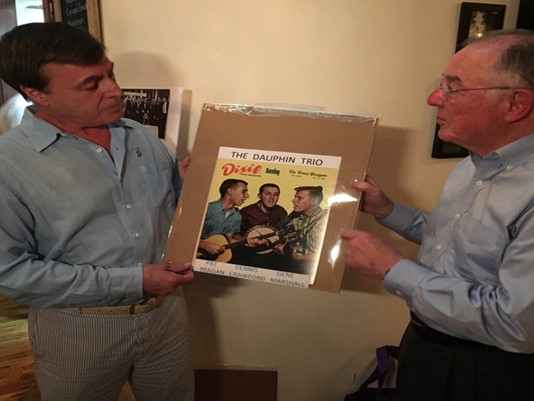 Even friends from college were there to celebrate his time as a music star, with the posting of a picture of the Dauphin Trio on the restaurant wall.

"Probably fifty years or so back, this was not even a dream," Dennis Crawford said, smiling. "But we had an awful lot of fun awful quick."

Even family members too young to remember the trio are fans now.

"Honestly, I'm really sad that I wasn't around at that time to really enjoy it, to be part of that crowd, to cheer him on, to be a really good fan," added his daughter Lesley Costner.

Back at home, Crawford puts a piece of his history on the record player, the Dauphin Trio's 'Movin' On' album, and listens to himself from fifty five years ago.

The Dauphin Trio formed when Dennis and his friends Gene Marshall and Pat Reagan began playing for parties during vacations to Dauphin Island in Alabama, and they caught on.

"We got a lot of invitations for pool parties, (and people said) 'Oh and by the way, bring your instruments," Crawford reminisced.

Dennis played banjo, Gene and Pat strummed guitars, and they became so popular they began to entertain at New Orleans nightclubs.

"We played there to standing room only, and it was huge, then from that we went to Bourbon Street. We were right across the street from Pete Fountain, who was a great guy," said Crawford.

It was there that a WWL executive contacted a New York record producer who signed the Dauphin Trio to make two albums in 1961. Their popularity soared in Boston, and a two-week contract in Fort Lauderdale turned into 18 weeks, sold out.

"This was just after the movie, "Where the Guys Are,' and there were jillions of girls down there, and no guys, and so, I thought this was a really, really good deal," Crawford said.

As Crawford listened to the Dauphin Trio record, you could see him go back in time. He was thrilled to hear his voice, and couldn't help dancing, tapping his toes, fingers forming the banjo chords from so long ago.

"There were a group of us that would follow them from bar to bar wherever they were playing, because it was the music of our time," said long time friend Ellis Frater. When asked how good the band was, Frater said they were wonderful.

Wonderful enough to perform at Pontchartrain Beach, and appear there with Nash Roberts. They played to thousands at Tad Gormley Stadium two years before the Beatles, performed on Channel 4's popular Saturday Hop, hung out with stars like Patty Page and Jimmy Durante, even appeared at the New Orleans Playboy Club.

"John Wayne and Pat his son came in one night, and that was absolutely crazy," Crawford recalled. "It was jam-packed with people, and we played a really good session."

"It was very impressive, they were young, they were very cute, you know the girls were swooning over them," she said.

For Dennis Crawford, it was special to have the Dauphin Trio picture hung inside College Inn, because back in the 1960s, the Trio was one of the bands that used to hang out here.

"It was the place where all the bands used to meet at the end of the night, so we have that connection, " said College Inn owner John Blancher. "We have a number of bands, we have their names, we have their pictures up here, the Nobles, the Jokers, the Corvettes, the Contours, and now the Dauphin Trio."

Crawford didn’t have a problem finding a picture when Blancher called him.

"He said he was looking for some new pictures, and I said I think I've got one," Dennis laughed.

Even though the group it’s on the radio now, but the party helped people remember the good old days.

"I know that it's not what's on the radio nowadays of course, something really different," said Lesley Crawford. "But if you listen to it, and you give it a chance, it's got a great beat, good music, good topics, it's good."

Dennis Crawford had a successful career as an insurance executive, but the music still fills his soul. The Trio only performed for two years, breaking up when Gene and Pat received draft notices. Gene passed away in 2002, but Dennis recently reconnected with Pat, who is retired and living in Vermont.